(This is a past event)
There are hundreds of festivals taking place during summer season in Japan. Gion Matsuri is the most famous among them and draws the greatest number of spectators from Japan and overseas. Like many other Japanese festivals, Gion Matsuri originally begun as a form of prayer to stop the plague disease in 869. 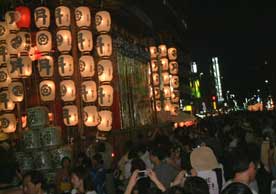 The festival lasts for a month of July but its main events are held on July 14, 15, 16 and 17. For the four days, cars are restricted from the main streets for the display of floats, and people in traditional costumes playing music. More than 300,000 people fill the streets in the city center to enjoy the displays and food from vendors. Thousands of lanterns are lit on the floats in the evening.

The three days preceding the big parade on the July 17 are called Yoi-Yama. In this period, the floats are stationed in each town’s streets. There are 23 floats, displaying their ornaments such as tapestries and carvings. They allow you to enter the floats by purchasing token called Chimaki. It is probably difficult to find where to get Chimaki, so better to be accompanied by our Volunteer Guide. Until July 16th, streets are more crowded after 6 p.m. when the lanterns turn on as people come out to see the festival after work.

Another famous attraction is called “Byobu Matsuri”. Families in neighborhood show their private treasures such as screens and kimonos to public by displaying them in front of their houses. The Muromachi and Shinmachi areas are well known for this attraction. 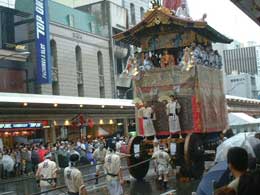 This is the day of the big parade. People in traditional costumes get on the floats. The parade starts at 9 a.m from Shijo-Karasuma, it then goes east on Shijo-dori street and turn north on Kawaramachi-dori street and finally turns west on Oike-dori street. The parade usually ends at noon. Each float weighs about ten tons and requires the technique called Tsuji-mawashi to make a 90 degree turn, that bamboo sticks are placed underneath the wheels to slide the float. This is the highlight of the parade.

This year (2014), there is the second Gion Matsuri known as Ato-Matsuri on July 24th with another ten floats including the gorgeous Ofune-hoko. Ato-Matsuri’s parade is held on the 24th and its Yoi-yama (the eve) starts from the 21st. Ato-Matsuri is not as big as the first one, but may be good for watching floats without busy crowd.

If you come to Japan during the Gion Matsuri, you are lucky to be able to enjoy such a wonderful event. If you missed it, don’t worry because there are still so many festivals around Kansai region especially in July and August. Matsuri is a general word for festive events. Traditional matsuri are typically dedicated to the local shrine in hope that the deity will bring good harvest and prosperity of the region.