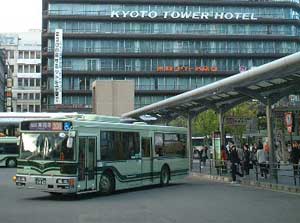 The City bus is the most commonly used transportation in Kyoto. It’s convenient for the locals to commute and for tourist to visit almost all major temples and shrines in the city. With the One-day Pass which is only 500 yen, you can take buses as many times as you need in a day. Without the Pass, you pay 230 yen each time.

Preparations : The bus  route map is necessary to find the line you are taking from a hundred or more buses. It’s available at their ticket counters of the major City subway stations, or PDF can be download at their website. The Pass is available from a driver on a bus. But it doesn’t come with a map and sometimes a driver sells out all Passes of the day.

How to use a bus

The City Bus’s all-day pass is only valid for the City Bus, which are mostly green colored. Other private buses are not spotted often and they usually have red line. To use the Pass for the first time of the day, you put it through the printer beside the driver as you get off to mark the date of use. Then you just show a driver the Pass when using for the second time. Major bus stations have signs noticing an approach of the next bus.

Buses of three digits number are normally faster then two digits and sometimes skip minor stations. Besides, RAKU BUS are particularly convenient for tourists to visit popular temples in the city. The following three lines are most frequently used by tourists.

Balloons show the popular tourist sites. Blue zone is out of the flat fare area which requires additional 150 to 250 yen to the All Day Pass validity.

People tend not to think about using taxis and trains when they have the One-day Pass. But a bus is not always the best way. When you have to wait the next bus for more than 15 minutes at a station, or on a day the traffic is busy for tourist season, consider the other transportation options. You may have heard that a taxi in Japan costs too much, but they are about 620 yen for the first 2km. Why don’t you share the ride with someone waiting for the same bus? A normal taxi accommodates four passengers. Here’s an example that it’s worth using taxi.

Practical help by our Free Guide

Based on the information hereabove and further life experience as local people, our Free Guide can help you use city bus and other public transport network practically and efficiently. If you like our help, please request our free guide.