This is a past event. 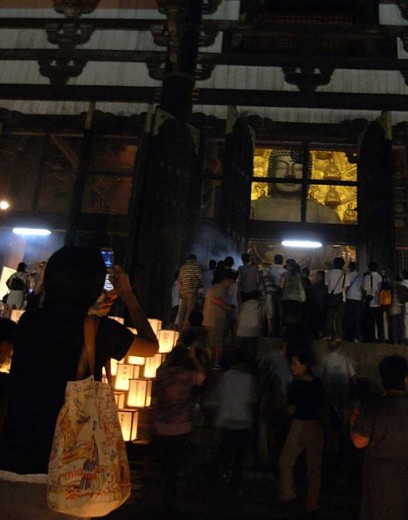 Todaiji Temple Buddha Hall and lanterns in the front yard.

Nara celebrates “Tokae” lantern festival in August. Thousands of candles are lit in the Nara park, gardens, and temples. It will take place every evening between August 5th and 14th in 2013.

The festival began in 1999 to attract more people to Nara in summer, and it has become very popular in recent years. Traditional lanterns of August, which are thought to guide the spirits of deceased people coming back to our world during Obon period, are used in this event as a symbol to convey our wishes in general.

Candle lights of lanterns are lit during 7 p.m. to 9:45 p.m. all around the central city of Nara, mainly along the road from the JR and Kintetsu Nara station to Todaiji Temple. The festival will not be canceled by light rain as long as the candle flames are not affected.

Tokae is a modern festival, but we will have two more special lantern festivals in Kasuga Shrine and Todaiji temple on 14th and 15th August.

Kasuga Taisha is the Shinto shrine which has over thousand years of history. It has a thousand bronze lanterns in the shrine and two thousand more stone lanterns along the walking way to the shrine. They are lit only for three days in a year, one day in February, August 14th and 15th. The lanterns are donated by people who ask Shinto deity to grant their wishes. They are all lit at 7 p.m. and lasts about two hours. You have to pay 500 yen admission to see the bronze lanterns in the shrine. They close the gate at 9 p.m. If you are in the shrine around 6:30 p.m. you will see the ritual dance dedicated to the Shinto deity.

On 15th August, Todaiji temple closes at 5 p.m. as usual, and reopens from 7 p.m. to 10 p.m. Lanterns here are dedicated to the Great Buddha statue and ancestor’s spirits that is believed to visit this world on the day called “obon”. The Buddha statue is illuminated and the small window of the hall is open through which people outside see the Buddha’s face. Priests chant a special prayer in the hall. There are also Tokae’s lanterns outside the hall.