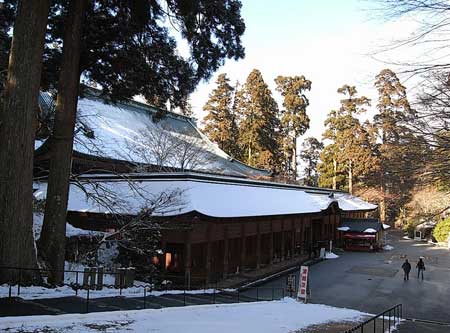 Located in the mountain, miles away to the northeast from Kyoto city, Enryakuji is a quiet Buddhist temple. You take the cable car to go up the mountain and feel the temperature lower by a few degrees. It’s cool in summer and snowy in winter. It is one of the largest and most important temples in Kyoto.

Priest Saicho built the temple in eighth century as the center of Tendai sect of Buddhism. He studied Buddhism in China and played a major role in the development of Japanese Buddhism. His follower monks founded other sects to which most Japanese people belong today.

As his sect became powerful, warlord Oda Nobunaga thought they oppose his administration, then attacked the temple in 1571. So the present buildings are not the original but the reconstruction completed in the middle of 17th century.

Mount Hiei had long been accessed by only monks on foot, but thanks to the modern transportation, tourists today can reach the summit (848m) by car, cable car or ropeway. In winter, however, some of them are closed or operated by the off-season schedule. During winter, the cable car is the most frequent and useful.

Enryakuji Temple consists of three areas, To-do, Sai-to, and Yokawa. And each has two or three must-see buildings. Buses run between the three areas except for winter season. In winter, you can easily get to the To-do area, but to walk further 1km west to Sai-to and another 3km to Yokawa areas is not easy when there is a lot of snow on the ground.

It is a half day tour from central Kyoto city if you only see around To-do area which has the most important facilities such as “Konpon Chu-do” –Central Hall for the main statue of Buddha with the old lamp in front which keeps the light for over 1200 years, “Dai Ko-do” –lecture hall for monks, “Kaidan-in” –Hall for ordination, and the museum which has exhibits the temple’s treasures. In Sai-to area and Yokawa area, “Shaka-do” and “Yokawa Chu-do” are the central structures respectively.

How to get there : 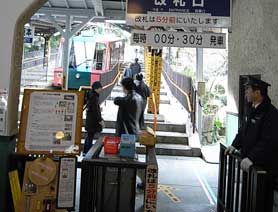 From Kyoto station, take the JR Kosei Line for four stops to the northeast. After getting off at Hieizan Sakamoto station, either walk 15 minutes or take a bus available only Sunday and Saturdays to the cable car station. The cable car runs every half an hour and takes about 15 minutes to the upper station where you can get the spectacular view of Lake Biwa, the largest lake in Japan. There you check the time of the last downward car, normally it’s 4:30 pm in December and 5 to 6 pm in the other months.

seasonal schedule : As shown in the map below, “Sakamoto Cable” car operates throughout the year, and it is the major way for visitors in winter. As another option, “Hieizan Drive Bus” connects To-do area and Kyoto station via Sanjo-Keihan station for about 70 minutes, so this is the easiest way because you don’t make any transfer. But they run only three times in winter, and more times for the rest of the year.

There are only two restaurants in To-do area. One is in Enryakuji Kaikan which serves vegetarian dish for lunch only available with prior reservation. Another one is the soba noodle restaurant in downstairs of the temple’s office. You will also find some eating places in the town of Sakamoto which lies on the foot of the mountain between the cable car station and the JR Hieizan-Sakamoto station. In the Sakamoto town, Hiyoshi Shrine is also worth to visit.