Visitors with limited time in Kyoto would be well advised to head for the eastern part of the city, where many Buddhist temples are situated on the foot of Mt. Higashiyama. It’s a wide area, extending roughly from Tofuku-ji in the south to Ginkaku-ji in the north. With so much to see careful planning is essential. The most popular temple is Kiyommizu Temple, and neighboring Kodaiji Temple and Yasaka Shrine are also worth a visit.  So this is the core area of the eastern city.

The area evoking the Japan of imagination; winding lanes and stone alleyways crisscross gentle slopes, and are crammed with boutiques, souvenir shops  and restaurants. We recommend you walk from Yasaka Shrine to Kiyomizu Temple by following the lanes shown by blue lines on the map below. 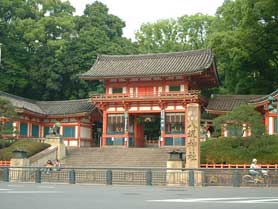 Let’s start a walking tour at the Yasaka Shrine. Vermilion gate building is the western entrance of the shrine. The temple’s origin dates back to the 7th century, but the main hall is the reconstruction from the 17th century. It’s the Shinto shrine and dedicated to the deity responsible for protection against disasters and people’s prosperity. In July, Gion Matsuri which is one of the three greatest festivals in Japan, is held in honor of the deity here. Admission is free.
website: http://web.kyoto-inet.or.jp/org/yasaka/english/

At the east end of the Yasaka Shrine, a path leads to the Maruyama Koen Park which is known as the best place for Hanami, cherry blossom viewing in early April. You can walk out the shrine from the southern gate to the next Kodaiji Temple, through Ishibei Koji stone alleyway or Nene street.

You must walk up the long staircase to get to the entrance of Kodaiji Temple. It’s a 400 year-old Zen Buddhist temple with nice gardens. One of the best known Samurai hero Toyotomi Hideyoshi’s wife, Nene built this temple to pray for the repose of her husband’s soul. Nene is buried under the memorial hall where the couple’s images are enshrined. The temple is good at presentation to tourists and have various events to attracts visitors. You should check their website before you visit.

From October 20 to December 10, 2012, they extends the opening hours to 9:30 p.m. so that people enjoy the illuminated temple buildings and gardens.
website: http://www.kodaiji.com/e_index.html

After leaving Kodaiji Temple, walk for another 15 to 20 minutes to Kiyomizu Temple. Off the route, you will see the tall wooden tower on the right-hand side which is Yasaka-no-to five story pagoda built in the 15th century. Opening days and hours are occasional. 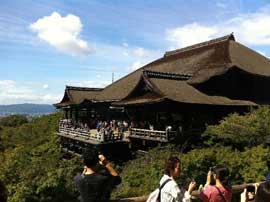 Eight out of ten people traveling to Kyoto city visit Kiyomizu Temple. It’s one of the oldest temples in Kyoto and famous for the veranda built on the cliff. A monk Enchin found clear spring water at this location in 8th century and built a small hut here. That is the origin of the temple. The water is still gushing and people prize it as holy water. You can drink it from the waterfall.

Most of the temple buildings were built in 1630’s by Tokugawa Shogun after the original buildings were collapsed due to fire. Still, it’s amazing how the wood constructions built on the edge of a cliff survive for almost 400 years in rain, wind and earthquakes, being stepped by thousands of visitors a day.

The main object of worship in this temple is the “Thousand-armed Kannon” Bodhisattva. It is enshrined in the back of Hondo main hall and open to public once in 33 years. However, visitors can view a its replica and other statues of assistant Buddha at any time.

The opening hours are extended to 9:30 p.m. during three periods in Spring, Summer and Autumn seasons with the buildings illuminated. In 2012, they are from March 10 to 20, August 14 to 16, and November 10 to December 2.
website: http://www.kiyomizudera.or.jp/

From the Kiyomizu Temple, there are other ways to walk down to the Higashiyama street (bus route): Chawan zaka street which is lined with many pottery shops, or Toribeno Sando lane which runs through the large graveyard.

In this tour, you should skip Kodaiji Temple if you don’t have time. The shortest way from Kiyomizu temple to the bus street is Kiyomizu zaka street. 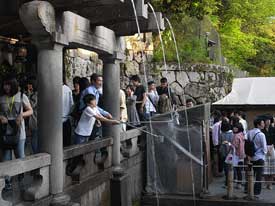 At the end of the walking route of Kiyomizu temple, there is the Otowa waterfall. You can take the water with the ladle and sip it from your palm. Or you buy a cup and attach it to the ladle to reach to the water. When the temple is busy, you must wait in a line for about half an hour before getting the water. Also the bottled package is available for 500 yen.
People make their wishes before drinking the water. Tour guides say “Three waterfalls give you long life (health), success in exam, and love matching. Take the one you want or no wish will be realized if you take from two waterfalls” But the temple says the three are the same, any wishes.