* This is the past event.

Himeji Castle is one of the most important historic buildings in Japan.  It was built in 16th century as a fortress of the feudal load and has preserved its original form for 400 years.  The features of the castle are the beautiful white wall and ornamental design of architectures which give it the nickname of elegant bird, white egret.

See the castle under restoration 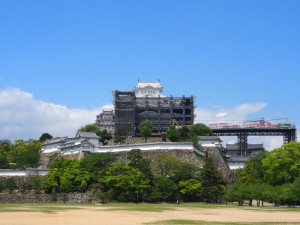 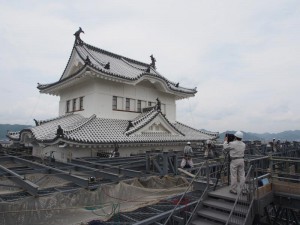 The five-year restoration project has started in 2010.  They replace the roof tiles and re-plastering the walls. At the time of updating this article (April 2014), dismantling of roofed scaffold covering donjon, the main building, is under way and inside the donjon still closes the door to visitors.  The restoration project will complete in March, 2015.  Besides, most other parts of the castle grounds are accessible to tourists.

During the Sengoku warring period in 16th century and subsequent Edo period in 17th century, warlords had their castles as a military and governing center of the province and as their residence. Therefor, the castles in Japan generally were designed with the purposes of defense from enemies and showing off the load’s status as well.

As time went, the number of castles was reduced by the Tokugawa government due to the administrative reason. After the samurai period, castles became useless and destroyed, but some were still used as a military base of the Japanese modern army and then bombed by the U.S. in the last war. As a result, there are only twelve castles today remaining in the form of the medieval era. Himeji castle is among them and the best example of Japanese castle.

The castle before veiled