While traveling Japan, you might use Shinkansen bullet trains as just locomotions.  But the bullet trains are not only means of mobility, but also masterpiece of Japanese technology. I definitely think that JR Himeji Station, not inside the trains, is one of the best spots to feel the technology, the high speed of Shinkansen.  At the platform of the station, you can closely look at “Nozomi” or “Mizuho” trains pass way too fast, the speed of 300 kilometres per hour. 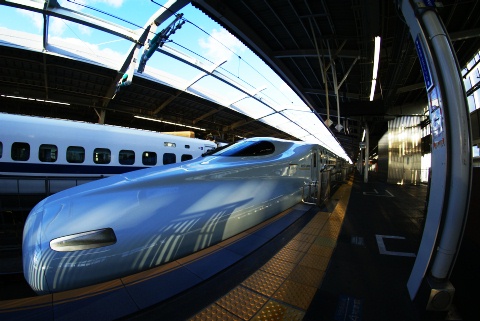 Also, the track around Himeji Sta. is long straight so that Shinkansen trains can easily reach the top speed, 300 kph.  Even though there are some other long straights in the west, most of them are in tunnels and on bridges of the track, rather too dangerous, or inconvenient to just observe the trains passing.  On the other hand, Himeji Sta. is the bullet train station where some of second fastest train service stops, such as some “Nozomi” as well as all “Hikari” and “Kodama”.  So it is convenient to visit and safe to watch, unless you jump off the platform.

Actually, many of foreign tourists visit Himeji Sta. to watch Shinkansen trains.  For example, this is one of famous You Tube video shot by a tourist.

This video has drawn numerous foreign visitors all year round.

In short, if you have time, I recommend visiting Himeji Sta. to feel Japanese first class engineering.

JR Himeji Station (free of charge if you have JR pass, or 120yen/p)