The map below shows the locations of 124 tombs of Japan’s emperors in history. The first Emperor Jimmu dates back more than 2500 years and the 124th emperor Showa passed away 24 years ago, and all of them have large resting places called “Goryo” where they were buried or their remains were preserved. On the map, you see 120 locations in Kansai region, mainly in Kyoto and Nara prefectures. It is because the region had long been the imperial capital. Now that it’s in Tokyo, the former two emperors, current, and future emperors have their tombs in Tokyo. (Refer the list of Japanese Emperors on wiki)

You can never step in tumulus, so the blue balloons on the map roughly show the spots (at front gate) you can access as close as possible to the tombs.

Nintoku-ryo Tumulus is the Japan’s largest Kofun burial mound located in Sakai city, southern Osaka prefecture, which is considered the tomb of Emperor Nintoku. It is said to be one of the world’s three largest imperial mausoleums along with the pyramid of the Pharaoh Khufu of Egypt and the mausoleum of Ying Zheng, the first emperor of the Qin dynasty of China.

Seen from the ground level, it just looks like a grove of old trees, but from above, it reveals an unique key-hole shape, which consists of the round part for the dead buried and the square part where a rite to respect the dead took place. The mound has 486 meters length, 35 meters high, and surrounded by three moats, outer one is almost three kilometers around.

There are hundreds of ancient tombs of ruling class in Japan, and especially, tombs for the Emperors are big, and here, Nintoku-ryo is the biggest. It was constructed in the middle fifth century for 16th Emperor Nintoku. Like many other Emperor’s tombs, Nintoku-ryo is off limits and protected by the Imperial Household Agency. It is a sacred place.

Standing on the center of southern edge of tumulus, you can see it from outside the moat. Unfortunately, there is no place in the neighborhood to overlook the tumulus to recognize its key-hole shape. However, about two kilometers to the north, Sakai City’s municipal office, 80 meter-high building, has an observatory floor on the top from which you can see the entire tumulus (still too low to see the key-hole shape).

For those who are interested in the archaeology, the museum near the tumulus has a collection of accessories excavated from Nintoku-ryo and other tumulus in Sakai city. Next to the museum is the authentic tea house where you can enjoy a cup of green tea with sweets.

Sakai City is in the half-way between Osaka City and Kansai International Airport. Nankai and JR railways connects them, and from the Osaka City center, it is only about 10 to 15 minutes ride by either train. The closest station to Nintoku-ryo is Mozu on the JR Hanwa Line. 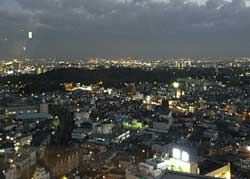