This is a past event. Tenjin Matsuri is an annual festival held on July 25 in Osaka. Thousands of people proceed on streets with floats and cruise on the river with boats. It is the biggest summer festival in Osaka and one of the three greatest festivals in Japan. 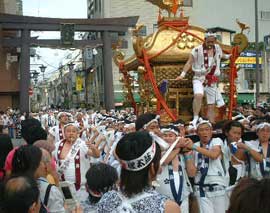 Osaka Temmangu, one of Osaka’s most famous Shinto shrines, begun a typical Japanese Matsuri about 1000 years ago, in which people take out the symbolic object of the shrine for the spirit seeing around neighborhood. The deity enshrined in Osaka Temmangu derives from Sugawara-no-Michizane, a politician and court scholar in the ninth century, and July 25 is his birthday.

Here are the major events on July 25. The festival will not be canceled for rain.

About 3000 people dressed in the traditional costumes leave Osaka Temmangu shrine with many floats at 4 p.m. and proceed the streets in neighborhood. Sound of drums, bells, and people’s chants enhance the festive atmosphere. You can watch this anywhere on the route indicated on the map below, but visit the shrine if you would like to see the original place. Subway Minami Morimachi station is close to the shrine.

After two hour procession on streets, people transfer to the boats at the riverbank around 6 p.m. About one hundred boats sail up and down the river for hours. We recommend you to walk the north bank of the river from Tenjinbashi bridge to Temmabashi bridge to enjoy watching the boats. 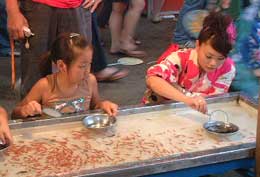 Fireworks are displayed at the riverbank from 7:30 to 9 p.m. The best spots to view them are near the Gin-bashi bridge and the park near the Imperial Hotel although they are extremely crowded.
There are a lot of vendors on the streets around the procession. You can buy varieties of snacks and drink, and enjoy some amusements like catching goldfish, shooting candies. People, girls in particular, wear yukata, a light casual kimono, which is typical in Japanese summer festival.