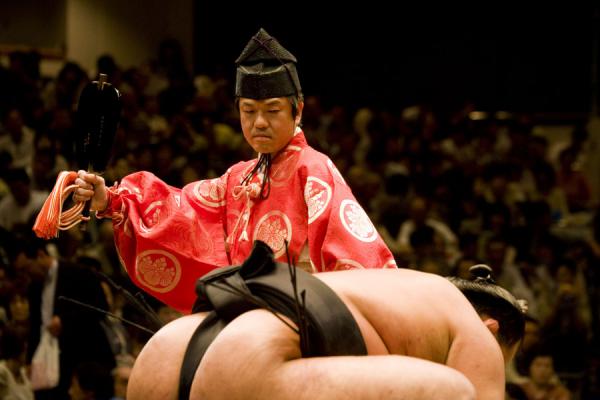 Sumo, it is a simple form of wrestling in which two contestants grapple with each other wearing nothing but a mawashi loincloth.

A wrestler wins a bout by forcing his opponent out of the ring, or by making him touch the ground with any part of his body except the soles of his feet using some technique such as throw.

Each spring Osaka plays host to one of six annual Grand Sumo Tournaments (known as Basho). 2017 Osaka Tournament runs from March 12th to 26th, and bouts are held daily. The venue is “Bodymaker Colosseum”, the Osaka Prefectural Gymnasium.

Originally a court function, sumo has a history of over 1,000 years. Bouts were held before the Emperor, and their outcome provided insights into how the year would turn out. This ritual was the earliest form of sumo.

In the 18th century, commercial sumo tournaments began to be held across the country. Along with Kabuki and Bunraku, sumo became an incredibly popular for of entertainment.

The sumo arenas of today have many features of historical significance. One of them is the canopy above the ring, which is modeled on the roof of a shrine. It signifies that sumo began as a Shinto ritual. 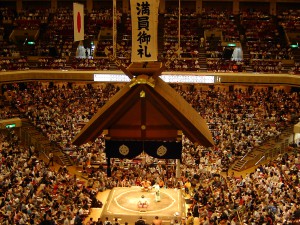 On each day of a tournament(around 3:50PM), the Yokozuna, the highest ranking wrestlers, perform a ring-entering ceremony. It involves stylized stomping, which is supposedly based on an ancient ritual designed to keep away the evil spirits lurking in the ground. 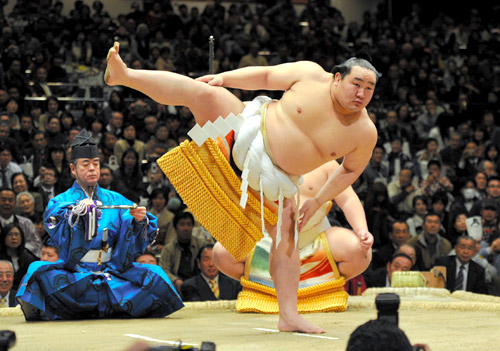 How a sumo bout proceeds and what to look out for

The initial charge, called Tachiai, is the first key moment. The main arm here is to knock your opponent off-balance by hitting him with your hands, arms, and head. If he loses his balance, it may be possible to push him out of the ring. 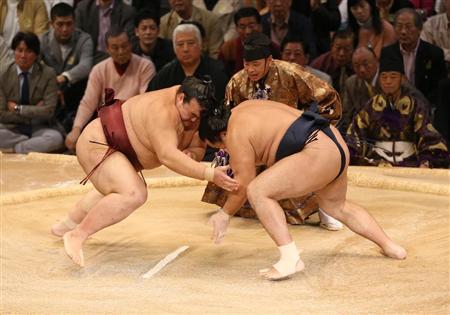 If both wrestlers remain standing in the ring after the taciai, they will start grappling. This is when grabbing your opponent’s mawashi becomes very important. This restricts your opponent’s movement and gives your a chance to executer a throw.

The key is to gain an advantageous position and then use an appropriate finishing technique. Sumo requires a combination of power and its strategic aspect is what makes it exciting.

Tickets starts to sell in advance on February 5th 2017. Highly recommended to purchase reserved seats in advance because tickets sold on the day sell out very quickly. For further detail, see http://sumo.pia.jp/en/. The expensive seats, which include meals and souvenirs often sell out quickly.

If you do not get any reserved seats, tickets for the non-reserved seats on the 2nd floor priced 2,100 yen (200 yen for children aged 15 and under), can only be purchased from the venue. Or you can watch Morning Sumo Exercise in Osaka.

Help by our Free Guide

Our Free Guide can help you watch sumo tournament. If you like our help, please request our free guide.